Their life at sea

The adult males spend about eight months at sea, while females and juvenile males spend about ten months. During this time their primary activity is foraging for food. (It should be noted that they eat nothing while on the beach.) While foraging they dive to depths between 1000 and 3000 feet, sometimes over 5000 feet. These dives last an average of 25 minutes and their surface time between dives can be as short as two to three minutes.  They use both their eyes (that are sensitive to bio-luminescence) and their whiskers (that are capable of detecting small vibrations) to locate prey. The females typically forage in the open ocean and thereby limit exposure to predators. The males feed on the outer edge of the continental shelf, a location richer in food but more dangerous. The main predators for elephant seals are orcas. Great white sharks also prey on elephant seals, especially younger ones.

Over the years we have had numerous opportunities to observe and photograph the colonies of northern elephant seals along the California Coast. These magnificent animals were almost hunted to extinction in the 17th and 18th centuries for their blubber so people could make oil for lamps and leather maintenance. The development of kerosene and other refined petroleum products replaced whale and seal oil but not before the northern elephant seal population was reduced to an estimated 50 individuals. In the early 20th century both the U.S. and Mexico initiated protection and they have rebounded to around 175,000 animals today.

Although there are numerous rookeries and haul outs along the west coast, from Vancouver Island to Baja California, we think the best viewing is at Año Nuevo State Park and Piedras Blancas in California. Año Nuevo is halfway between Half Moon Bay and Santa Cruz, south of San Francisco. This State Park has a large breeding colony and a great program of nature walks. The drawback is that the seal viewing areas are about a two-mile hike from the parking area. On the upside photographically, you are pretty much level with them. Caution is needed as the Park rules require that you stay at least 25 feet away from them for safety.

Piedras Blancas is 14 miles north of Cambria on the central coast of California and the best viewing beach is right next to the parking area on a boardwalk. Viewers are above the animals for the most part but still pretty close. The rookery and haul out area here actually stretch along about six miles of beach.

One group or another of northern elephant seals is visible on the beaches most months of the year.  The time may vary a bit up and down the coast. The following is based on what happens along the central California coast near Piedras Blancas.

In December the adult males, weighing in at 5000 pounds or more, come ashore to establish a territory.  During this time it’s possible to watch them bellow, posture and sometimes engage in dramatic, bloody combat to establish dominance. Although they do fight aggressively, life threatening injuries are rare. The result of this activity is that alpha males will claim territory, with a number of beta males lingering around.  Territories typically are around 100 yards wide, although the topography of the shore lines can impact this. 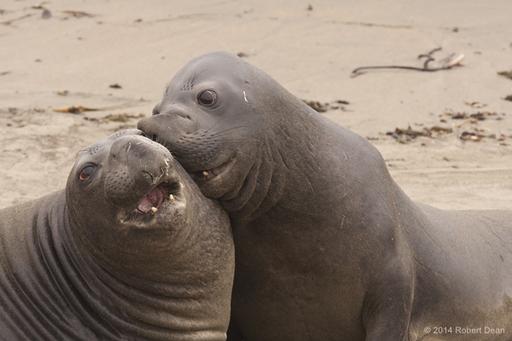 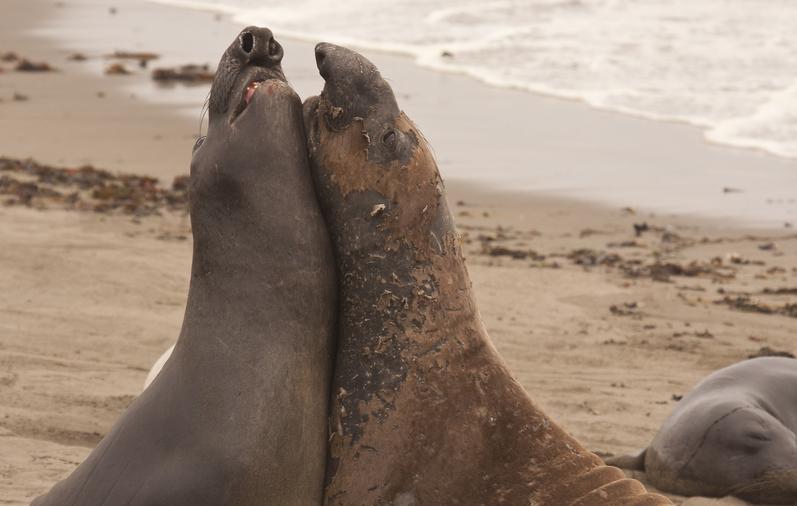 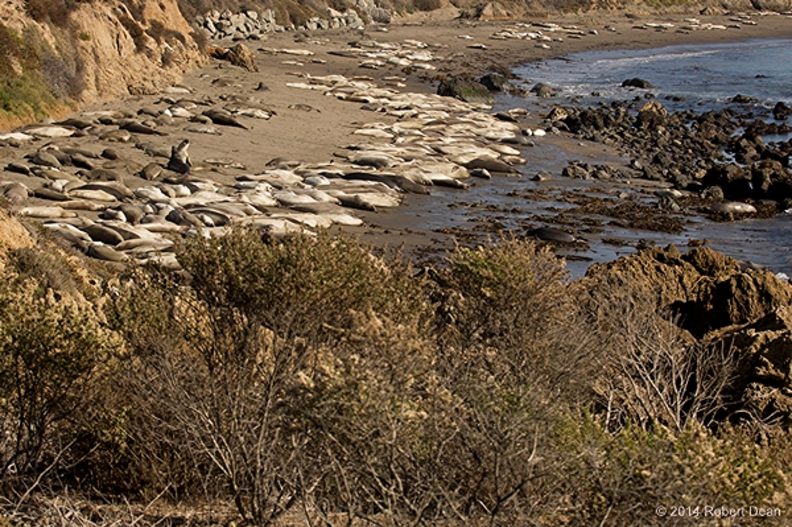 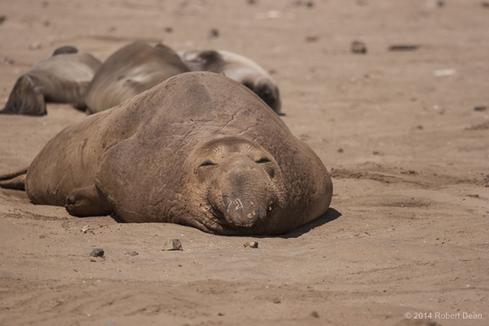 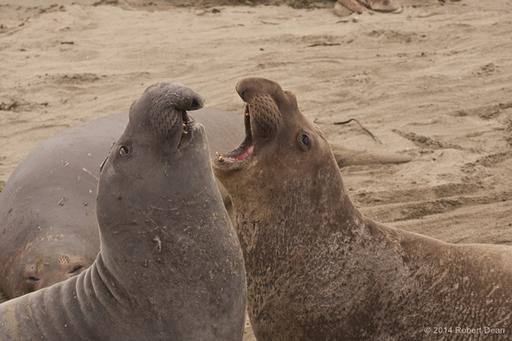 About Mid-December the pregnant females start to arrive and join harems around the alpha bulls. Research has shown that the females probably select harems based on beach location rather than the alpha bull’s attraction, sorry guys. This arrival of females lasts into early February. Birthing usually occurs about one week after the females arrive.  Pups weigh about 70 pounds and are three to four feet long. Pups nurse for four weeks, at which time the female comes into estrus, mates with the bull and heads out to sea.  Weaning is abrupt. This time of mating not only represents the pup’s end of nursing but is very hazardous.  Although the pups have typically gained weight (quadrupling their birth weight), they are still very small compared with the 2 ½ ton bulls. Some perish from being crushed by bulls.

Mid-February to early March sees the end of breeding and most adults leave. The remaining “weaners," who spend about eight to ten weeks on the beach after their mothers have left, then venture into the sea. Their time on the beach allows them to develop the physiological changes that will help them survive in the ocean. They spend time in the sheltered tide pools reducing their buoyancy (fat content) and expanding the oxygen storage capacity of their muscles and blood. 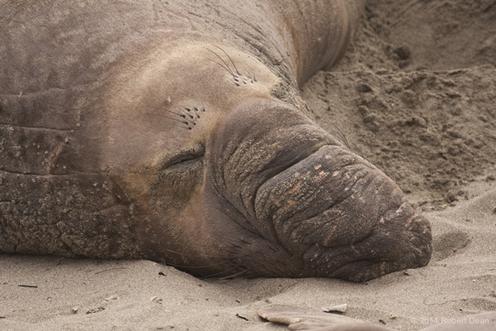 From late March into Mid-May, the juveniles of the previous year and the adult females return to the beach to molt. They complete their molt and go back to sea by the end of May. After the juveniles and adult females leave, sub-adult males come ashore to molt, followed by the adult males in August and September for their time to molt. Juveniles and yearlings come back in October and November to spend time on land building their muscles and strengthening their skeletons. This also gives them time to engage in jousting to develop their skills for future mating competition. This jousting is not only a time to develop skills, but also toughen their chest and neck coat, providing a type of armor.