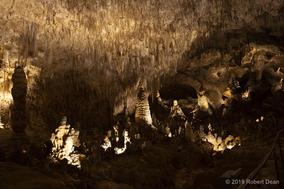 Carlsbad Caverns National Park in the Guadalupe Mountains of southern New Mexico includes a spectacular underground world that calls to photographers. The cave system formed about six million years ago, but its geologic roots go back a couple of hundred million years before that.  During the Permian Period, from 299 million to 251 million years ago, an inland sea, known today as the Delaware Sea, formed in what is now present-day New Mexico and Texas. Around the shore line a reef developed. The reef was made primarily of sponges and algae. Each generation growing on top of the previous one. Over millions of years, the pressure compressed the underlying material into limestone. That reef formation is the one in which Carlsbad Caverns formed.

Tectonic uplift caused caves to start forming about 12 million years ago. Around 6 million years ago Carlsbad Cavern began to form. Most caves form when rain and snow pick up carbon dioxide from decaying plant material and form weak carbonic acid, which filters down and gradually dissolves rock. Caves in the Guadalupe Mountains, what we now call the fossil reef in southern New Mexico, formed by a different process. The large oil and gas deposits below the mountain range generated hydrogen sulfide gas. Tectonic activity allowed water, rich in hydrogen sulfide, to percolate upward. When this water met rain water and oxygen, strong sulfuric acid was created. This strong acid quickly dissolved the limestone forming the large chambers. Also, very unique microbial life forms aided the forming of the chambers. These microbes actually metabolize some of the minerals in the limestone. Starting about ½ million years ago rainwater from the surface rainforest picked up carbon dioxide and followed tiny cracks down to the caverns. As the water droplets, each containing a tiny bit of calcium, dripped from the ceiling, a little of that calcium was left. This action created (over millennia) the stalactites descending from the ceiling or the wide sheets, called drapery, that formed on sloping walls. The stalagmites coming up from the floor result from the water droplets from the stalactites losing calcium as they struck the floor.

Carlsbad is considered a dry cave, meaning little water is there. This is caused by dry cool air coming in from the surface compressing and warming. The warm air starts evaporating water that is there. The warm moist air flows back out. The cave “breathes” and cycles all its air every 38 hours.

Photography in the Caverns:

Some much for cave geology, now let’s look at the challenges for photographers: lighting, size, and restricted use of tripods.

The main thing we need to deal with is the lack of natural light. The National Park Service has provided illumination in the form of electric lights of various technologies, including incandescent and LED. This means that color temperature and the amount of illumination varies, some areas are bright, and many areas dim or dark. Add to this the size of the chambers and the restrictions for tripods (allowed on the paved paths of the self-guided Big Room only) and we get some real problems.

Let’s start with the color temperature issue. Depending on the location, the lighting has different color temperatures. Most of the cavern is illuminated with warmer lights (reddish-yellow); some areas have cooler (bluish-white) lights. Illumination is not uniform in most locations, so the only way to address this is to shoot RAW and adjust the color later, on your computer. Some creativity during post processing is necessary.  Color for example is a matter of personal choice.  Ours was to try to represent the cave as we saw most of it, namely maintaining the warmer color.

When you make an image of a relatively large area that varies from very bright to very dark, the range of brightness is well beyond the dynamic range of a digital camera. To solve this problem, use High Dynamic Range (HDR). We found that making about 5 to 7 images ranging from -2 stops to +2 or +3 gave us the capability to produce a composite image showing the subject matter quite well. Recommended settings and techniques are: Aperture priority at f8 +/- 1 stop, ISO 800, focal length as needed to include what you want, and use of a tripod with a cable release. (Shutter speeds can range up to several seconds, so the tripod is a must.) The following sets of images were processed using Photoshop™ HDR Pro tools.

All photographs on this site are copyrighted by the photographers and carry liability if copied, downloaded, reproduced or manipulated in any way without prior consent. 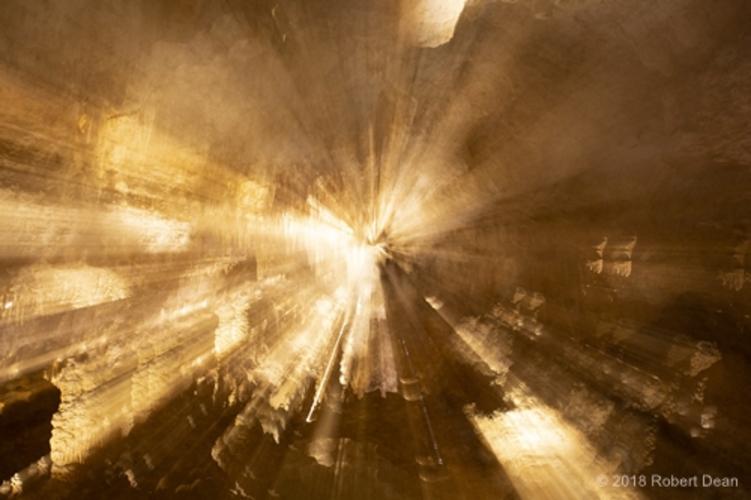 Some of the opportunities in the Cavern call for using flash. If your camera has a built-in flash with a relatively strong Guide Number (greater than 30 for ISO 100), then you should be able to use your built-in flash for those subjects. Remember as you increase the ISO the effective working distance for flash increases. An example is our Canon™ 7D Mk II that has an effective flash distance of about 18 feet at ISO 800 and aperture of f5.6. If your camera flash is less powerful, use an auxiliary flash unit. These are typically quite a bit stronger (Guide Number greater than 80) so you may need to experiment with flash compensation. 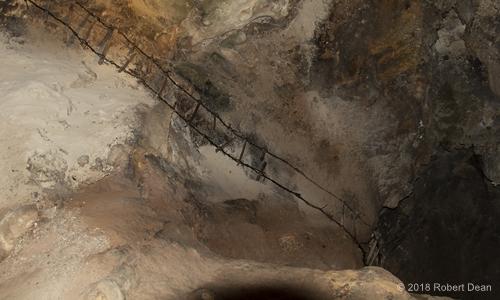 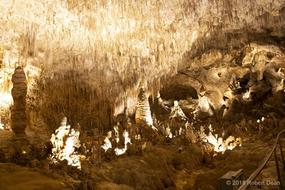 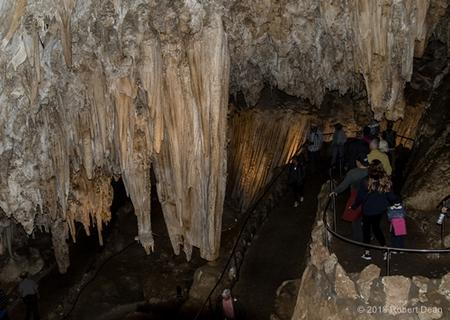 In some cases where there was one bright area and the rest dark, a pair of images, one shot as metered and one overexposed 3 stops produced a very usable image.

Many of your images in a cave will have a very slow shutter speed using a tripord. This is a great opportunity to try some out of the box artistic techniques. One of the easiest is to zoom while the shutter is open. The image below was made with a 10 second exposure, f8 ISO 800. The focal length was "zoomed" from 17 to 40 mm during the exposure. 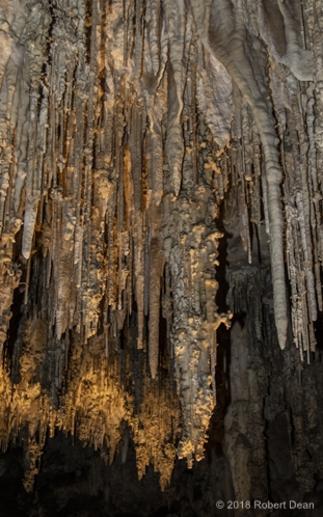 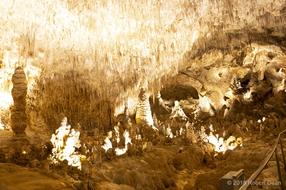 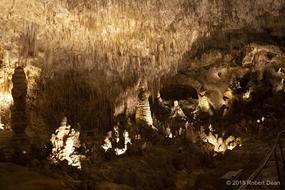 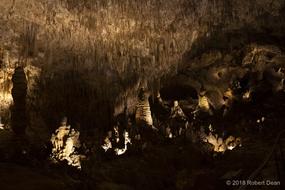 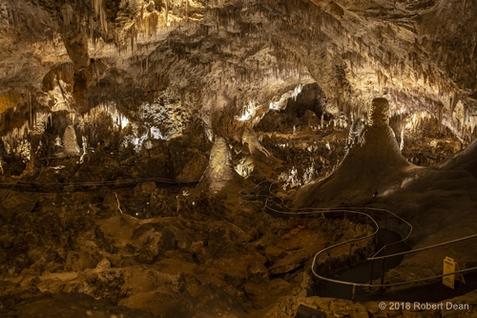 The old ladder from "days gone by" goes down into the lower part of the cave. Flash was necessary to illuminate as much of the scene as possible. 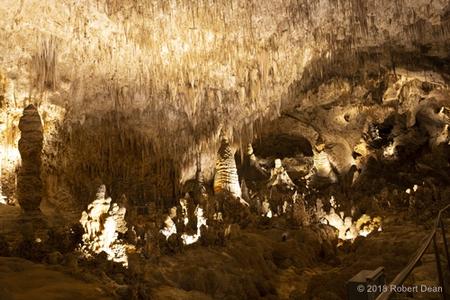 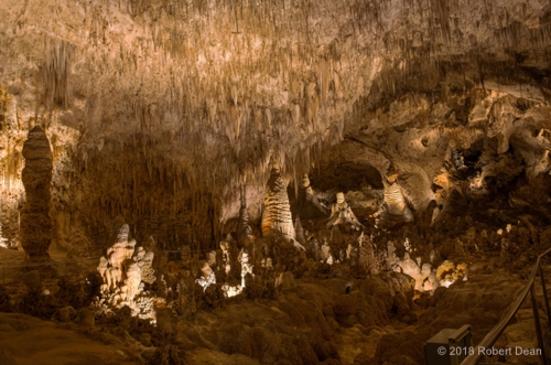 Similar stalactite formations photographed with and without flash. The image on the left (with flash) shows to "daylight color" of the deposits while the image on the right ("ambient light") shows the warmer color. 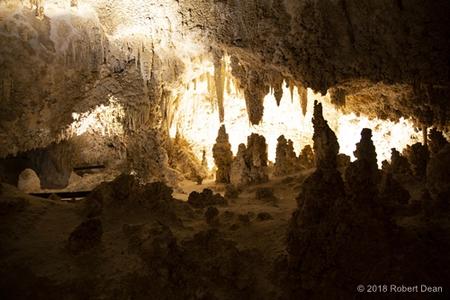 While on the self-guided tour of the Big Room you are allowed to use tripods and monopods, provided they stay on the paved path. To explore the other rooms (King’s Chamber, Queen’s Chamber, Papoose Room and Green Lake Room) you must go on a ranger-guided tour. Photography (including flash) is allowed but tripods and monopods are not. To get images on this tour you’ll need to bump up the ISO or use flash. The ability to do HDR is pretty much limited to your camera’s internal capability. It’s a really good idea to experiment and practice with your camera’s internal HDR before going to the Cavern on guided tours because you do need to keep up with the other people, though the pace of the tour is not fast.

There are other things to do at Carlsbad. Above ground opportunities include bat emergence (seasonal), trails and a one-way gravel, scenic drive. An additional cave tour is available. The Park Service leads tours of Slaughter Canyon Cave. This cave has no lighting or paths, so visitors require head lamps and must walk/crawl on the natural cave floor. Photography is difficult.

Bats: There are seven species of bats that are found in the Cavern. About 400,000 Brazilian freetail (aka Mexican freetail) bats spend the spring, summer and early fall in the cave. The majority are female as this is a maternity colony. Visitors can watch the emergence at dusk between early spring and late October (sometimes into early November). Be advised there are restrictions. No cameras or any electronics are allowed near the cave mouth to protect the bats during the bat program.

The entrance to Carlsbad Caverns National Park is located about 20 miles south of the town of Carlsbad, New Mexico. The road up to the Visitor Center and cave entrance is another 8 miles. Carlsbad is about 165 miles from El Paso and 280 miles from Albuquerque. There is an airport in Carlsbad with one airline flying between Carlsbad and Albuquerque or Dallas. We found it easier and more economical to fly to El Paso, rent a car and drive. Lodging in Carlsbad is plentiful but because of the oil and gas fields nearby, is pretty expensive. We stayed in the smaller town of Artesia, about 45 minutes north of Carlsbad (90 minutes to the Caverns). The Visitor Center at the Caverns has a cafeteria-style café with good food.

Hours of operation are:

Late May to Early September (Summer Hours) 8AM to 7 PM

There are two ways to enter or exit the cave. The Park Service sets opening times and last entrance times for both the natural entrance and the elevator entrance. These times are set to allow the average person to enjoy the Big Room. Photographers should double that at a minimum. If you choose to enter or leave via the natural entrance you need to know that the elevation change is equivalent to 75 stories over about a mile and a quarter.

The National Park Service website has a lot of information: https://www.nps.gov/cave/index.htm 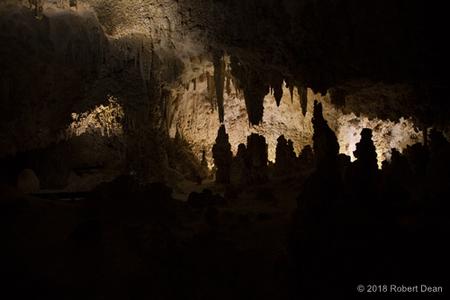 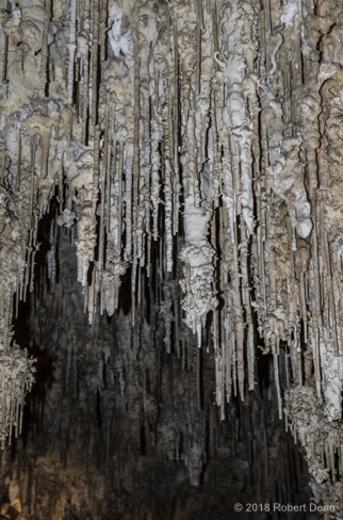 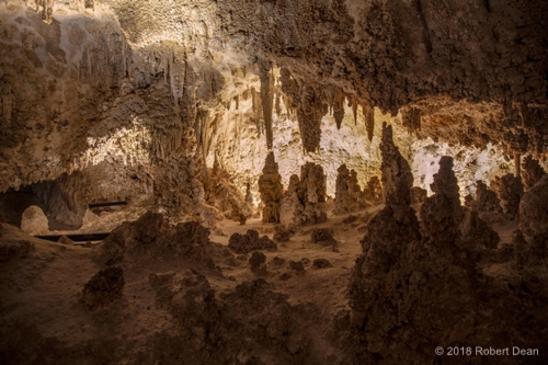 One of the dramatic features of Carlsbad Cavern is the size of the chambers. The self-guided tour of the Big Room really brings this home but how can/do you convey this?  Since the path through the larger chambers doesn’t just go around the perimeter but winds around some formations, photographs with people or the path allows a sense of scale to be incorporated in the images.